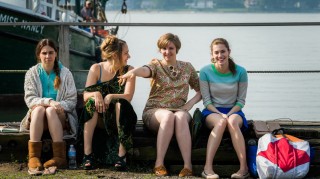 It can often be difficult to find a TV show that accurately depicts mental illness in a realistic and thoughtful light. However, fortunately, many new shows have been making an effort to portray mental illness in a much more genuine and representative way. Of course, given that everyone is different, no TV show will be able to entirely capture the same experience of everyone. However, many people who live with a mental health condition or care for someone with a mental illness, do take comfort in being able to relate to character going through similar struggles. So, this article will highlight some TV shows that have portrayed mental illness in ways that people have found comforting and thoughtful. So grab your popcorn and favourite blanket, and snuggle in.

In Girls, actress Lena Dunham's character Hanna, has struggled with OCD for most of her life. However, after scoring a book deal, Hanna experiences an extreme onset of OCD due to the pressure of finishing her novel within a month. Although many cases may not be as severe as Hanna's, the show attempts to highlight how living with OCD can impact life in many different ways and how OCD can be intensified by stress.

Written and starring the comedian, Josh Thomas, Please Like Me, is a comedy-drama TV show that follows the journey of character Josh, his family, and friends that navigate through a range of different issues. However, the story of Rose, Josh's bipolar mother is a standout for many reasons. While in one episode Rose may be energised and full of life, in another she might be depressed and bed-ridden. The story also does an excellent job of portraying how complicated Josh's and Rose's relationship can be at times, and yet how much love they have between them. Therefore, the show does not show only portray what it is like living with a mental illness, but also what it can be like for someone caring for someone they love.

Jessica Jones a TV Show that portrays the main character Jessica Jones (played by Krysten Ritter) as a crime-fighting superhero and private investigator. However, as well as some awesome battle scenes, the show also touches on a range of other issues such as Jessica Jones's long term struggle with PTSD. Sadly, TV shows often depict people with PTSD as being weak or incapable of doing daily tasks, however Jessica Jones shows that it is possible to have PTSD and still be a strong and independent person.

Parks and Recreation is well-known for its comedic scenes and hilarious characters. Therefore, it might come as a surprise that Parks and Recreation has also dealt with topics such as mental illness. However, many have praised the show for how they have dealt with depicting depression in a particularly happy character, Chris Traeger. This kind of depiction of depression is particularly important because it shows that depression can affect people in all kinds of different ways and that even 'happy' people can suffer from depression.